Augmented Reality: Changing the Way We See the World

Augmented reality apps are becoming more and more popular with the rise in smart phones. GoldRun, a relatively new app, lets companies create augmented reality campaigns. By combining augmented reality with location-based marketing, companies can engage consumers. Some have created games that people can play to unlock discounts, others have used it to promote products.
Airwalk launched a campaign last November for a limited edition shoe. People in Washington Square in New York City and Venice Beach in Los Angeles could shop in a virtual pop-up store. Users saw a floating shoe on their screen and could buy the shoe online. The campaign was successful, and the shoe sold out within 24 hours. 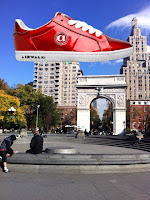