The Harry Potter series is one of the most popular series in the world. By putting her brilliant idea on paper, J.K. Rowling’s life changed overnight. She went from living on benefits to having more money that she knew what to do with. With all of that fame and fortune, others are sure to take notice and some may even try to benefit. Since Harry Potter became wildly popular, several have accused J.K. Rowling of stealing their ideas, and others have tried to steal her ideas and pass them off as their own. Cases have been brought against not only J.K. Rowling, but also her publishers, Bloomsbury (UK) and Scholastic (US), and Warner Bros., which owns the rights to the Harry Potter movies. The first lawsuit was in 1999.

Nancy Stouffer
Nancy Stouffer brought the first lawsuit against Harry Potter, just two years Harry Potter and the Sorcerer’s Stone was published. Stouffer attempted to sue J.K. Rowling, her publisher, Scholastic, and Warner Bros. for copyright and trademark infringement. Stouffer wrote a book that was published in 1984 entitled The Legend of Rah and the Muggles, in which there is a character, Larry Potter. The first part of Stouffer’s claim was that she owned the rights of the “muggle” trademark. According to Stouffer a muggle is a small creature that has no hair and can understand all languages. However, any Harry Potter fan knows that a muggle is someone who lacks magical powers. As for copyright infringement, Stouffer claimed that other elements in the books were also similar. For example, in Harry Potter there is a Keeper of the Keys (none other than Rubeus Hagrid), and in Stouffer’s book there is a Keeper of the Gardens. Also, Larry Potter has unruly black hair and wears glasses, much like Harry Potter.
In the end, a New York court ruled in favor of J.K. Rowling, Scholastic, and Warner Bros. US District Court Judge, Allen Schwartz, ordered that Stouffer be prohibited from claiming the trademark rights to the term “muggle.” She is also no longer allowed to claim that her intellectual property rights were infringed. On top of that, Schwartz ordered that Stouffer pay a $50,000 penalty, along with a portion of the legal fees acquired by J.K. Rowling, Scholastic, and Warner Bros. I agree with the court’s ruling. A couple of similar terms and character traits isn’t enough for me to believe that Stouffer’s ideas were stolen. Harry Potter prevailed in this instance, but several other suits followed.

Chinese Harry Potter Books
In 2002, the year before Harry Potter and the Order of the Phoenix came out, a fake book was written and published in China. The fake book, Harry Potter and Bao Zoulong (which translates to Harry Potter and Leopard-Walk-Up-to-Dragon, whatever that means…), was far from original. The text itself was almost verbatim from J.R.R. Tolkien’s The Hobbit. Most of the names in the novel were changed to names of Harry Potter characters. I’d like to take this opportunity to give credit where credit is due. The first chapter of the novel is almost entirely original. The story begins with Harry transforming into a hobbit from a magical rain. I can assure you that didn’t happen in any of the Harry Potter books or The Hobbit.
The book didn’t fool too many people, and was almost immediately recognized as a fake. J.K. Rowling and Warner Bros. took the necessary steps to stop distribution of the book. After the fifth book was released in 2003, interest in the fake book was almost nonexistent. The publisher, Bashu Publishing House had to pay a fine and issue a public apology in China’s Legal Times for printing and distributing the book. As of 2007 the author of Harry Potter and Bao Zoulong was still unknown.
Dmitri Yemets
In 2002 Dmitri Yemets, a Russian author, wrote and released his book, Tanya Grotter and the Magical Double Bass. The protagonist is a teenage girl with magical powers who attends a school for witches. She wears glasses, flies on magical instrument (sounds like Harry’s broom…), and has a mole on her nose (sounds like Harry’s scar…). Rowling and her publishers sued Yemets for copyright infringement. Yemets insisted that the work was a parody. He claimed that there were several differences between the two, and no one would mix up the works. The covers however, are strikingly similar. When I first saw a picture of the cover my immediate reaction was, “Wow, those covers are the same. If I wasn’t such a die-hard Harry Potter fan, I may confuse the two books.” 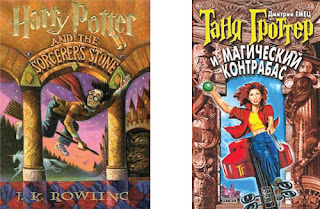 The courts in the Netherlands stopped distribution of the book, saying that it did not qualify as a parody and therefore was guilty of copyright infringement. However, international copyright laws vary from those in the US. Because of this, in Belgium, the Flemish publisher Roularta Books, chose to print only 1,000 copies and let people decide if it was in fact plagiarism. Rowling didn’t sue, and the book was surprisingly popular and sold out. Since then the books are still being published in Russia and several sequels have been written.
Adrian Jacobs
The estate of Adrian Jacobs, author of Willy the Wizard, brought the most recent case against Harry Potter. The estate attempted to sue J.K. Rowling and both publishers. The claim was first made in 2004, and in the US, the case against Scholastic was just wrapped up in January of this year. Unfortunately, the case is still going on in the UK against Rowling and Bloomsbury, and the trial is scheduled to be held in February 2012. Rowling was accused of plagiarizing the works of Jacobs in the fourth book in her series, Harry Potter and the Goblet of Fire. Jacob wrote his book in 1987, ten years before Rowling wrote the first book in the Harry Potter series, and three years before she came up with the idea. Jacob lost all his money in a stock market crash in 1991, and died in 1997, before he could see the success of Harry Potter. 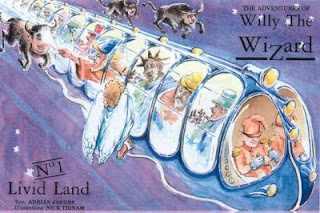 Willy the Wizard is a 32-page book with 16 pages of illustrations, while Harry Potter and the Goblet of Fire is a 734-page novel. Willy the Wizard follows an adult who takes part in a wizards’ contest, while Harry Potter and the Goblet of Fire is about a teenage wizard who takes part in the Triwizard Tournament, competing against three other wizards. Harry Potter and the Goblet of Fire is very detailed and goes to great lengths to describe the three different tasks that the competitors have to complete. Along with the story of the tournament, there is an entire side story going on dealing with Lord Voldemort and his followers, better known as death eaters. This book continues storylines that began in the first three books in the series, and creates new storylines that are carried on in later books.
In the US the ruling was decided based on the fact that ideas and concepts can’t be copyrighted. J.K. Rowling can’t be guilty of stealing the idea of a “wizard duel” when it was used as an essential element in so many fairytales. The books don’t sound remotely familiar to me. Jacobs didn’t invent wizards or contests, so I’m not really sure why his estate feels his ideas were stolen.
Conclusion
J.K. Rowling’s brilliance certainly spawned some urges in people to attempt to benefit from her work. Whether they tried to claim that Rowling stole their ideas, or they tried to steal Rowling’s and write their own works, they all had the same thing in mind: They wanted to benefit from this wonderful creation.
So far, J.K. Rowling has managed to come out on top in these lawsuits. However, this franchise is sure to continue growing, with one more movie being released in July of this year and The Wizarding World of Harry Potter opening just last year in Orlando, FL. With this growth I would be surprised if others didn’t step forward and claim their ideas were stolen. Or maybe someday soon we’ll be reading about Sherry Shmotter and her seven-year long battle with Lord Shmoldemort. 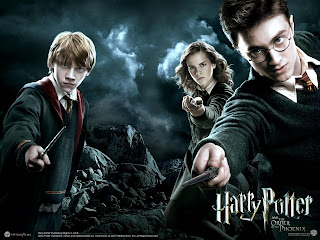